For other hardware, see Unlisted Hardware.

This section is a community-enriched list of pieces of hardware that do not belong to the HCL, along with information about how well they work (or not), workarounds, etc.

On XCP-ng <= 8.0, using default bnx2x driver triggers a kernel Oops on XCP-ng (no ping and freezing the host): 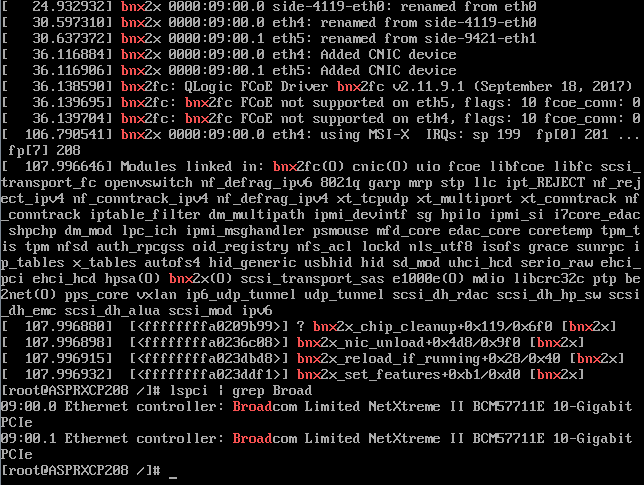 Fixed drivers have been released as official updates.

The kernel module is just a repackage for XCP-ng of the AQC111U drivers avaialble for Linux Kernel 3.10 on the Marvell website (opens new window).

The kernel module has been tested in a homelab environment with XCP-ng version 8.2.

To install the driver follow the instructions provided in the Alternate drivers section below and use aqc111u-module as package-name (module-name would be aqc111u).

Despite the AQC111U-based adapters support the IEEE 802.3bz standard (AKA 5BASE-T) and will correctly negotiate with compatible peripherals the communication at 5Gbps, the actual bandwidth will not exceed 3.5Gbps due to the overhead of the incapsulation of the ethernet protocol over the 5Gbps connection via USB 3.0 (AKA USB 3.1 Gen 1).

XCP-ng occasionally provides alternate drivers for users who have issues with the main drivers installed with XCP-ng.

Those driver packages can be installed alongside the main packages and will take precedence gracefully.

Note: there is another way, albeit more experimental, to use alternate drivers: use our experimental alternate kernel (see dedicated section below).

In this section we provide instructions that are common to all the provided drivers.

The simplest way is to reboot.

Else, if you know the module name, you can unload it from the kernel and reload it.

If the driver does not work as intended, just remove the package from the system and follow the "Activation" steps above.

The alternate drivers may get updated to newer versions when the system is updated or upgraded. If that causes regressions, please open a bug report.

Upgrades using the yum method will retain the alternate driver package, unless we stop providing it (usually, because the main driver will have been updated too). If the alternate driver is retained, it may have changed versions, so you may still need to consider going back to the main driver. If after an upgrade no driver works correctly for your system anymore, open a bug report.

A list is maintained at https://github.com/xcp-ng/xcp/wiki/Drivers (opens new window)

Additional kernel modules are a lot like alternate drivers (most of the above section applies to them) except that they don't replace an existing driver from the system. They add a new one that didn't exist at all.

Their list is maintained at https://github.com/xcp-ng/xcp/wiki/Drivers (opens new window), in a table named "Other kernel modules available in XCP-ng X.Y".

We provide an "alternate Linux kernel" on XCP-ng 8.0 and above, named kernel-alt. It is kernel 4.19, as the main kernel, but with all updates from the Linux 4.19 branch applied. By construction, it should thus be stable. However it receives less testing so we cannot fully guarantee against regressions (any detected regression we'd work on a fix quickly, of course). We also backport security fixes from the main kernel to the alternate kernel when needed.

This kernel is mainly targeted at:

# Installation on an existing system

You can install it using

This will install the kernel and add a grub boot menu entry to boot from it. It will not default to it unless you change the default in grub.cfg (/boot/grub/grub.cfg or /boot/efi/EFI/xenserver/grub.cfg depending on whether you are in BIOS mode or UEFI mode).

There may also be a newer release of kernel-alt in testing repositories:

Boot the main kernel, then:

This will remove the added grub entry automatically too and set default boot to main kernel if needed.

1: There might be other NICs compatible as long as they are based on the Marvell AQC111U chip. ↩