XCP-ng is using Open vSwitch as its core, and supports various features from it.

If one NIC can be enough for your host, having a dedicated NIC for storage will be really important to get consistent performances (if you use shared storage (iSCSI or NFS).

This section describes the general concepts of networking in XCP-ng.

XCP-ng creates a network for each physical NIC during installation. When you add a server to a pool, the default networks are merged. This is meant to be sure that all physical NICs with the same device name are attached to the same network, authorizing seamless VM flexibility on any host of the pool.

Typically, you add a network to create a new external network (bridge), set up a new VLAN using an existing NIC, or create a NIC bond.

You can configure four different types of networks in XCP-ng:

This section uses three types of server-side software objects to represent networking entities. These objects are:

xe CLI, Xen Orchestra or XCP-ng center allow you to configure networking options. You can control the NIC used for management operations, and create advanced networking features such as VLANs and NIC bonds. Networks

Each XCP-ng server has one or more networks, which are virtual Ethernet switches. Networks that are not associated with a PIF are considered internal. Internal networks can be used to provide connectivity only between VMs on a given XCP-ng server, with no connection to the outside world. Networks associated with a PIF are considered external. External networks provide a bridge between VIFs and the PIF connected to the network, enabling connectivity to resources available through the PIF’s NIC.

Switch ports configured as 802.1Q VLAN trunk ports can be used with XCP-ng VLAN features to connect guest virtual network interfaces (VIFs) to specific VLANs. In this case, XCP-ng server performs the VLAN tagging/untagging functions for the guest, which is unaware of any VLAN configuration.

To use VLANs for your network logical isolation, it's really easy. You'll create a new network with a VLAN ID, and all virtual interfaces created on this network will transparently have traffic tagged in this VLAN. No need to configure anything inside your VM.

Then, select a pool where you want to create this network, and fill what's required, like physical interface selection, name and description and also VLAN number: 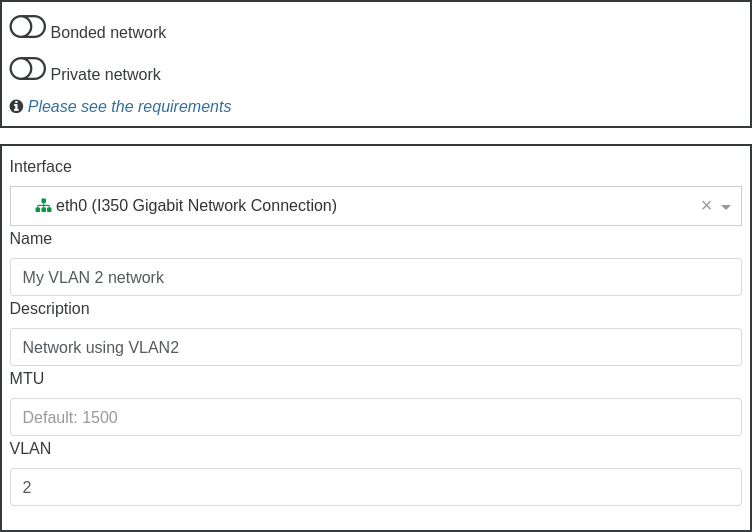 It's same as previous section, just check the "Bonded Network" and select multiple PIFs in the Interface selector. You can either use VLANs or not, it doesn't matter!

In a pool, all NICs across your hosts should match up exactly. So if your management is NIC 0 and your 10Gbit storage interface is NIC 4 on host 1, it should be the same on host 2.

If for some reason the NIC order between hosts doesn't match up, you can fix it with the interface-rename command.

These commands are meant to be done on non-active interfaces. Typically this will be done directly after install, before even joining a pool.

This will display all available options.

This will display the current interface mapping/assignments.

Interfaces you wish to rename need to be downed first:

The most common use will be an update statement like the following:

This example will set the mac-address for eth4 & eth8, switching them in the process.

The XAPI database needs the old PIFs removed. First list your PIFs for the affected NICs:

Reboot the host to apply these settings.

The interfaces by their new names need to be re-enabled:

The new interfaces need to be introduced to the PIF database:

Make note of the host uuid. Then introduce the interfaces:

By renaming/updating interfaces like this, you can assure all your hosts have the same interface order.

Before removing it, just be sure to remove its associated networks, so it won't cause trouble. Then, shutdown, remove the NIC and finally boot. After the boot, do a xe pif-forget uuid=<OLD PIF UUID> to get rid of the object record.

An SDN controller is provided by a Xen Orchestra plugin. Thanks to that, you can enjoy advanced network features.

Private network (using tunnels) are very handy when you want to access resources in a secure manner, that are not in the same physical network.

So we want a network that is:

That's exactly what you can have thanks to XO SDN controller (here via GRE tunnels): 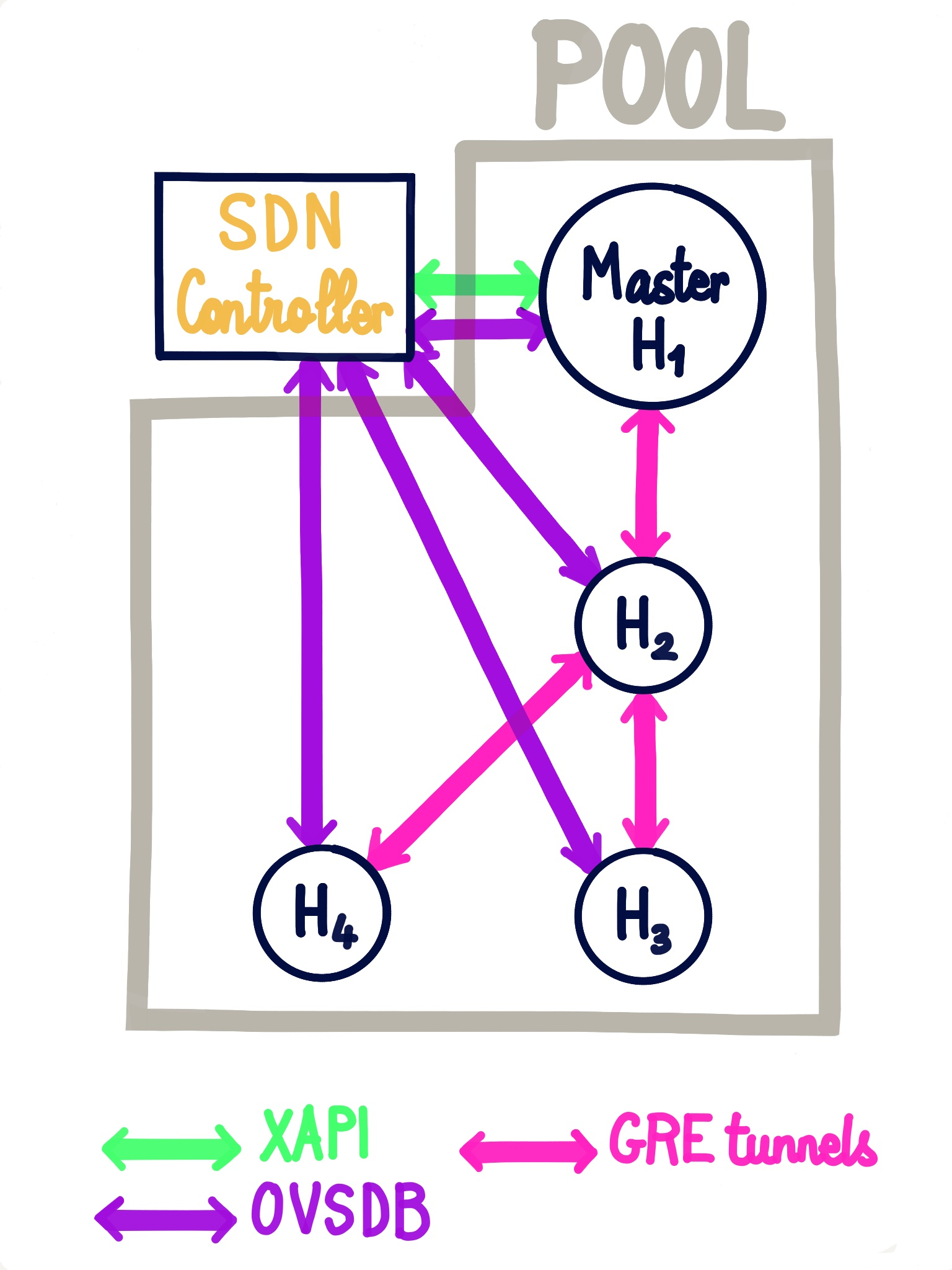 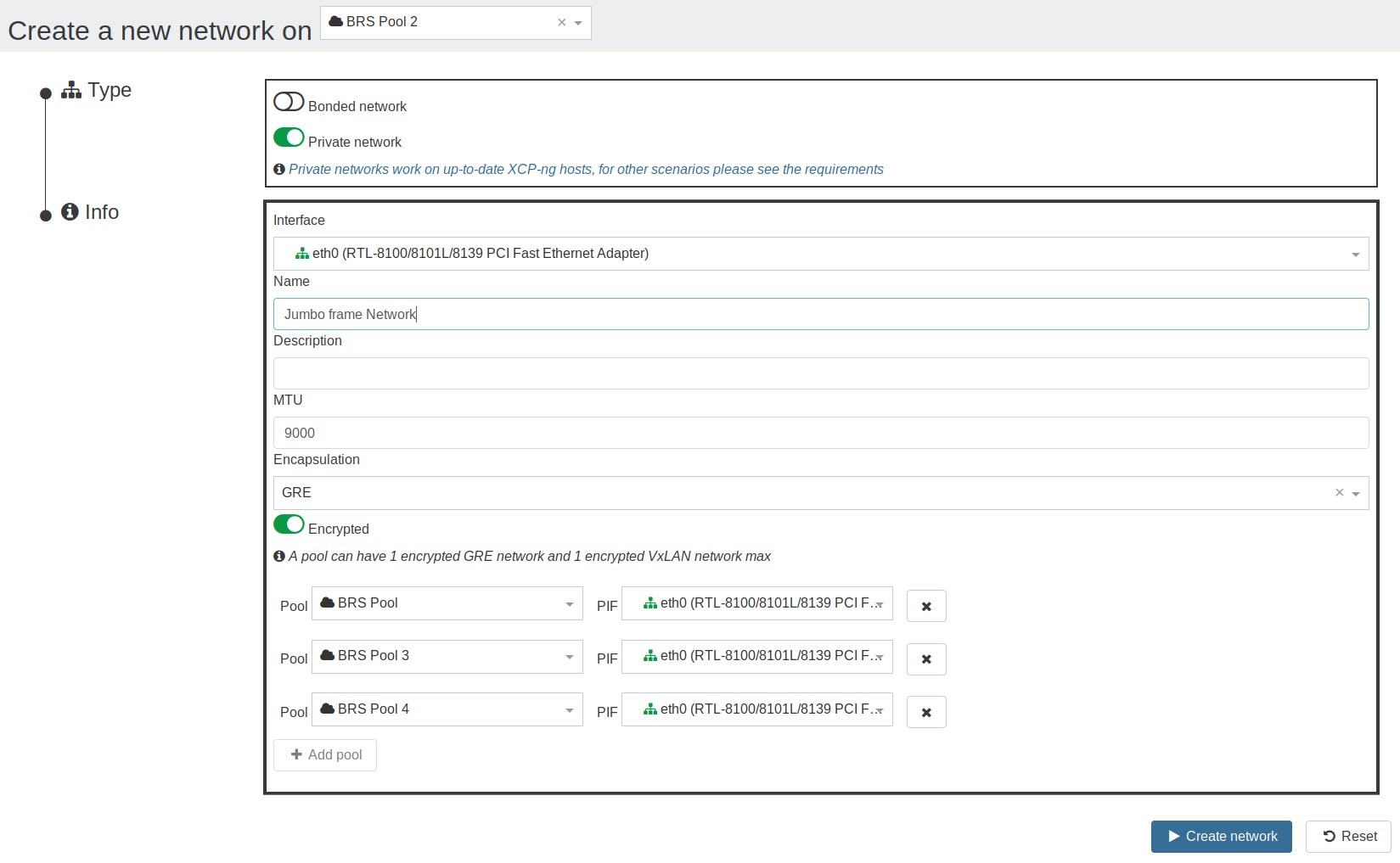 To be able to encrypt the networks, openvswitch-ipsec package must be installed on all the hosts:

This feature is coming very soon!

It means the TLS certificate, used to identify a SDN controller, on the host doesn't match the one of the plugin, to solve it:

The issue should be fixed.

To properly create persistent static routes, first create your xen network interface as usual. If you already have this network created previously, just get its UUID with an xe network-list. You're looking for the interface you have a management IP on typically, something like xapi0 or xapi1 for example. If you're not sure which one it is, you can run ifconfig and find the interface name that has the IP address this static route traffic will be exiting. Then get that interfaces UUID using the previous xe network-list command.

You must restart the toolstack on the host for the new route to be added!

To remove static routes you have added, stick the same network UUID from before in the below command:

A toolstack restart is needed as before.

This page describes how to configure a three node meshed network (see Wikipedia (opens new window)) which is a very cheap approach to create a 3 node HA cluster, that can be used to host a Ceph cluster, or similar clustered solutions that require 3 nodes in order to operate with full high-availability.

Meshed network requires no physical network switches, the 3 physical nodes are interlinked with each other using multiple network interfaces.

Example with 3 nodes that each has 3 NIC, 1 is for WAN connection and 2 are used to interlink with remaining 2 nodes:

Right now only known-to-work option is to use bridge network backend, but hopefully in future it should be possible to setup meshed network using Open vSwitch as well (should you know how, please update this wiki)

These steps will require reboot of all 3 nodes multiple times. They will also require you to use bridge network backend instead of Open vSwitch, which will result in loss of some functionality and is not commercially supported

# Switch to bridge mode on all nodes

# Create a bond on all nodes

In XCP-ng Center go to NICs tab and create a bond, selecting eth1 and eth2 as bond devices, leave all options as default

Again, ssh to dom0 on all nodes and execute

# Configure the interface in XCP-ng center

Go to tab Networking, rename bond1+2 device to something more memorable such as "MeshLAN", then add IP to all dom0 VMs to test it out, click "Configure" in IP configuration, add IP address and insert following addresses (you can use different addresses and range if you prefer to):

On each node respectively

Now SSH to each dom0 and try if you can ping all 3 IP addresses. If you can, you successfully created a meshed network. This network is going to provide interconnection between all 3 nodes and even if some node die, connectivity between remaining 2 nodes will remain operational.

This setup will save you costs of 2 network switches you would otherwise have to purchase and use instead to achieve HA connectivity.

This procedure has to be done for all hosts in the same pool.

If you are using bonds on FCoE capable devices, it's preferable to disable it entirely:

The Emergency network reset feature is available from the CLI using the xe-reset-networking command, and within the Network and Management Interface section of xsconsole.

Incorrect settings that cause a loss of network connectivity include renaming network interfaces, creating bonds or VLANs, or mistakes when changing the management interface. For example, typing the wrong IP address. You may also want to run this utility in the following scenarios:

If a Pool master or host in a resource pool is unable to contact with other hosts.

Use the xe-reset-networking utility only in an emergency because it deletes the configuration for all PIFs, bonds, VLANs, and tunnels associated with the host. Guest Networks and VIFs are preserved. As part of this utility, VMs are shut down forcefully. Before running this command, cleanly shut down the VMs where possible. Before you apply a reset, you can change the management interface and specify which IP configuration, DHCP, or Static can be used.

After you specify the configuration mode to be used after the network reset, xsconsole and the CLI display settings that will be applied after host reboot. It is a final chance to modify before applying the emergency network reset command. After restart, the new network configuration can be verified in Xen Orchestra and xsconsole. In Xen Orchestra, with the host selected, select the Networking tab to see the new network configuration. The Network and Management Interface section in xsconsole display this information.

TO have SR-IOV enabled, you need:

You can't live migrate a VM with SR-IOV enabled. Use it only if you really need it!

Then, you can enable and configure it with xe CLI:

The last command will tell you if you need to reboot or not.

Assign the SR-IOV network to your VM:

If you want to disable it:

With kernel version 4.15 a fix in the e1000e driver has been introduced (opens new window). However, this fix slightly slows down DMA access times to prevent the NIC to hang up on heavy UDP traffic. This impacts the TCP performance. A workaround to regain full transfer speeds, you can turn off TCP segmentation offloading via the following command:

There is currently no fix available / announced that allows offloading TCP segmentation to the NIC without sacrificing performance.

The following error message can be ignored: Cannot get device udp-fragmentation-offload settings: Operation not supported