Using Dynamic Memory Control (DMC) can be a good way to reduce your memory consumption, but you have to be careful: during live migration of a VM, XCP-ng will automatically reduce the VM memory to it's minimal settings and this can cause VM crash if it's not ready to function with this smaller amount of RAM.

We recommand you check your VM settings to verify if dynamic memory has been enabled. In Xen Orchestra, the Advanced tab of your VM will display the memory limits, in the "VM limits" section:

# Use a VNC client

If not, use this IP to create an SSH connection to the right host.

What have we done? We exposed a UNIX domain socket (which allows us to connect to the VM using VNC) directly over TCP.

For a Bios VM, screen resolution can be managed directly through the OS:

For a UEFI VM, you will need to set up your resolution in the UEFI settings of the VM. For that you first will need to enter the VM UEFI setup: 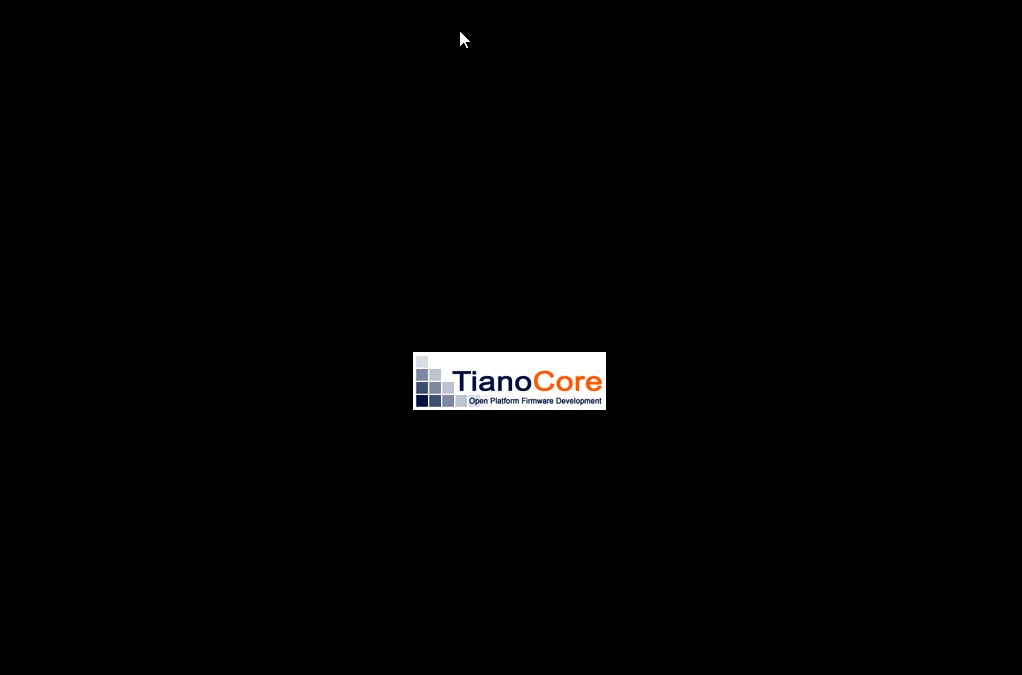 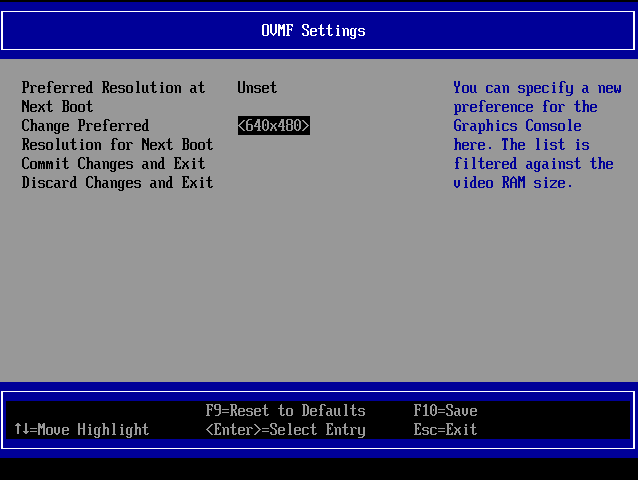 XCP-ng needs guest tools to be installed in the VMs in order to communicate with the guest operating system. This brings better performance and is required for various features.

In short: always install the guest tools to your VMs.

The tools are made of two main components:

Xen guest drivers have been built-in in the Linux kernel for many years. All currently supported Linux distributions include them.

So all we need is to install the management agent, which comes either as a systemd or as a sysvinit service, depending on the Linux distribution. The service is usually named xe-linux-distribution.

Those guest tools can be installed:

# Install from the distro's online repositories

Distros may provide guest tools for XCP-ng and Citrix Hypervisor in their own repositories. When they don't, or when the packages are outdated, we enjoin you to contact them to ask for new packages. Upstream sources are available at https://github.com/xenserver/xe-guest-utilities.

Distros often have policies that forbid enabling new services by default, so most of the time the steps are:

Enable the EPEL repository in the VM, then:

The service is not enabled by default, so enable it and start it:

Enable the community repository in /etc/apk/repositories, then:

The service is not enabled by default, so enable it and start it:

The last known package was published for the LTS release Focal Fossa. It was dropped from more recent releases. We enjoin you to contact ubuntu packagers for them to start packaging it again. In the meantime you can install the guest tools from our guest tools ISO image, as explained below.

Feel free to add other distros to the above list if they provide the tools in their repositories.

# Install from the guest tools ISO

For distros that are supported by the install.sh script (Debian, CentOS, RHEL, SLES, Ubuntu...), the process is:

If your Linux distribution is not recognized by the installation script but derives from one that is supported by the script, you can override the detection and force the tools to install by using:

The likeliness for the installation to work correctly will depend on how much those distros differ from their "parent".

For the remaining Linux distributions, mount the guest tools ISO as described above, then look for the xe-guest-utilities_*_all.tgz archive. Copy its contents on the system in /etc and /usr. It contains a System V init script by default but there's also a systemd unit file available on the ISO (xe-linux-distribution.service).

For the xe-daemon to start it is necessary that insserv is installed on the system. To make sure that is the case run

and as good measure reboot if they weren't already installed.

To install the guest tools open up the chroot environment with

and mount the ISO like with every other derived distro

To exit the chroot cleanly you have to kill the xe-daemon process that may have been automatically started. Otherwise you end up with a corrupted snapshot and transactional-updates will fail.

And again reboot the system to go to your newest snapshot.

After the reboot enable the service and start it with

It's a good habit, and may be even required in some cases (that would then be described in the Release Notes, to update the guest tools to their latest version when your XCP-ng hosts are updated.

Depending on the situation, just update from your distribution's online repositories, or follow the above installation process again.

FreeBSD is a 30-year-old operating system used widely to run all sorts of systems and has served as the basis for a number of operating systems, including MacOS, pfSense, and FreeNAS. The Xen kernel modules are built and distributed in the GENERIC kernel, so if you haven't customised or recompiled your kernel, the drivers will be present.

To communicate with the hypervisor, you need to install two ports (opens new window):

To manually install xe-guest-utilities from a package (opens new window) you can run:

By default the xe-daemon will run if FreeBSD detects the Xen hypervisor at boot. If that autodetection fails for some reason, you can force it to try by putting xenguest_enable=YES in your rc.conf file: sysrc xenguest_enable=YES.

On OpenBSD, the xen drivers are also already part of the kernel. The install.sh script doesn't support OpenBSD, but there are ways to install the management agent anyway.

FreeNAS is a locked-down version of FreeBSD, with many packages disabled to ensure a more stable environment for the fileserver. xe-guest-utilities is part of the packages that are not available in FreeNAS. But because it's based on FreeBSD, the packages from that OS can be installed, at your own risk. This is not a big issue for this particular package, because it's a leaf in the chain of dependencies - nothing in FreeNAS depends on it.

To install it on versions 11 or higher, until version 12.0-U1 of TrueNAS that includes it as default, follow these steps.

Windows guests need both the device drivers and the management agent.

There exists two different set of tools that you can use on your VMs: the official tools from Citrix Hypervisor, or the fully open-source tools from XCP-ng. Both work well. The important point is not to mix them in the same VM.

It's now up to you to choose.

Drivers built by the XCP-ng community.

# How to know if tools are already installed and working

The VM needs to be running for this test.

You can see this information in the General tab of the VM view.

More detailed information can also be found in the Advanced tab.

The first step, before the VM creation and first start, is to make sure than Windows Update is not going to install Citrix tools automatically at first boot. This behaviour is governed by the "Windows Update tools" parameter in a VMs advanced view. It must be off.

Before creating the VM:

Before starting the VM:

If you already started the VM with the option on, then the Citrix drivers have been installed automatically. Restart from scratch or see below how to remove them.

Tip: you can also check the value of the parameter from the command line.

True means that it's active, False that it isn't. It needs to be False.

Note: Restart can take a while if your windows is currently updating. Restart only occurs after windows has the updates finished.

Our installer is not able currently to cleanly uninstall Citrix tools. Citrix tools' uninstaller itself isn't either: it leaves various things behind.

So we need to perform a complete manual clean-up of the tools:

⚠️ In any case, first disable "Windows Update tools" for the VM (Xen Orchestra, advanced tab) and reboot it.

Following is the manual process.

You can try a simple process first with some chances of success.

Note: Restart can take a while if your windows is currently updating. Restart only occurs after windows has the updates finished.

If the confident option above didn't yield the expected results, then we switch to a more aggressive attitude towards the old tools.

What follows works in many cases, but some users occasionally still meet the following issues: XCP-ng tools not installing (but Citrix tools install well, so that is a solution to have working tools), and occasional BSODs in some cases or versions of Windows.

Through many tests, a user came up with a similar yet slightly different procedure that allowed them to avoid Blue Screens Of Death in their situation: https://xcp-ng.org/forum/post/27602.

Help is welcome to help us reconcile both procedures into one.

Note: Also have a look at our Troubleshooting Guide - Windows PV-Tools.

You can try to manually inject the missing drivers in recovery mode.

Tools from Citrix are not included in the guest tools ISO distributed with XCP-ng for legal reasons.

The only way to get the management agent is from Citrix. It can be freely downloaded from the Citrix Hypervisor download page (opens new window), provided you create an account on their site. Name of the item: "Citrix VM Tools for Windows". The installer will install both the management agent and the device drivers.

Since Citrix released their 8.2 CU1 version of Citrix Hypervisor, the Express edition is not available anymore for download. However, you can still get the Windows tools from the previous releases that are still available under "Citrix Hypervisor and XenServer Legacy Versions". You will also find present and past releases of the tools at: https://support.citrix.com/article/CTX235403 (opens new window).

If you are using Xen Orchestra, you can switch the "Windows Update tools" advanced parameter on from the "Advanced" tab of the VM view. This will install the device drivers automatically at next reboot ⚠️ but not the management agent which still needs to be installed from Citrix tools' installer.

... So the "Windows Update tools" option is not a complete solution if you need the guest metrics from the management agent. However it may be a convenient way to get future driver updates if you wish so.

If your VM already has XCP-ng tools and you wish to switch to Citrix tools, then you need to do the same kind of clean-up as described higher in this document for the opposite situation.

If you would like to contribute improvements to the install.sh script so that it supports your distro, create a pull request against: https://github.com/xcp-ng/xe-guest-utilities/tree/master/mk. Relevant files are usually xe-linux-distribution and install.sh.

The XCP-ng team is looking for help in improving the guest tools installer, build process, and clean-up tools.